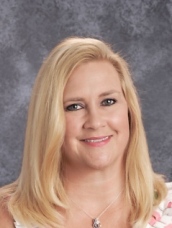 Mrs. Vittitow was born in Minot, North Dakota. She and her husband, Bruce, have two children, Olivia and Blake. She attended a small town school in K-12th grade, with only 18 students in her class. She earned a B.S. in Music Education at Minot State University. While at Minot, she earned scholarships for opera. She and her husband married after college and moved to Northern California where they lived until moving to Kentucky in 2005.

Shortly after moving to Bardstown, Mrs. Vittitow began singing with the One Voice choir and cantoring. She is the Children’s Choir Director here at St. Joseph. Her favorite activities include watching her children play music and sports. She also loves singing and directing in the St. Joseph choirs, and enjoys working with photos, making slideshows, and video editing. Her favorite vacation was a cruise she took with her husband Bruce for their 15th anniversary. While in Jamaica, they did the Rain Forest Tree Top Rip Line Traversing. “It was the most exciting thing I’ve ever done,” she says. A favorite childhood memory is of taking a family driving trip from North Dakota to Southern California when she was ten and staying with some cousins who had a big house and pool! “We did all of the fun Disney stuff and swam in the ocean.”

She names her grandmother and her daughters (including her mother) as having a positive influence on her life by showing her what joy and peace comes to a person who has a deep faith in our Lord Jesus Christ. She credits her dad with teaching her a great work ethic and a love of family. Her favorite part of teaching is working with the children’s choir. “They all have so much to offer in the form of their musical abilities and I look forward to helping them become even better!” she says. Her favorite quote is”Before anything else, preparation is the key to success.” Alexander Graham Bell