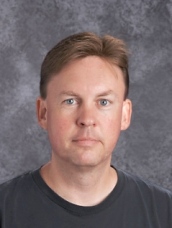 Mr. Patrick Miller was born in Louisville, Ky. He has a younger sister and a daughter. After graduating from Larue County High School, Mr. Miller went to Western Kentucky University where he received a B.S. in Physical Education and a Master’s Degree. He has been teaching for many years at St. Joseph School. His favorite activities are reading, swimming, and playing and shopping with his daughter. Mr. Miller also enjoys watching baseball, basketball, football and golf. His favorite vacation was a 21-day European trip where he traveling to England, France, Italy, Austria, Switzerland, and Germany. “The beauty of Switzerland is unbelievable (Wow!)” he said. While on the trip, he was able to see the Pope in Rome. A favorite childhood memory is of long summer nights playing with the neighborhood kids outside for hours.Mr. Miller’s parents have been a positive influence on him. “They have always been in my corner. I know that I can trust them.” he said. His daughter has also been a big influence. He says of her, “She is only a child but she is one of the best people I have ever been around.” Mr. Miller enjoys getting to know the students, listening to them, talking to them, etc. He enjoy students that work hard. “I don’t care about a child’s athletic ability but I expect effort,” he says.His favorite quote is: “I can accept failure but I cannot accept not trying.” Michael Jordan